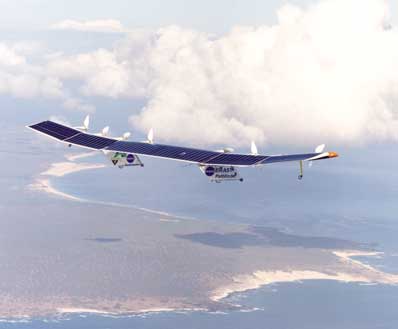 I propose static air collectors to be placed on the wing of a Pathfinder type Endurance Research Aircraft for unlimited airborne flight.

The aircraft in this case will now be electromagnetic, solar, hydrogen powered hybrid. Static air collectors on the aft sections of the wing, special copper coated brushy wing areas which remain very low profile but stick up in places past the boundary layer. The static energy collectors will collect electromagnetic energy from the friction of movement thru the air and fire or spark them in sequence to magnets running the propeller to make it spin. Each static collector will be in series and fire at a different time then the next one to it in a pulse sequence, which will also trickle charge the on-board ion-lithium SuperTech batteries, which are also being charge by the latest lightweight fives times more efficient solar cell sheets, which the wing will be made of.

Our goal is to fly an aircraft for six months without refueling or need for fuel; essentially unlimited airborne flight or “one with the clouds” in infinite aloft forward atmospheric flight. Think on this.

“Lance Winslow” – If you have innovative thoughts and unique perspectives, come think with Lance; http://www.WorldThinkTank.net/wttbbs